Again & Again, We Find Ourselves Here – For our Good Friday service we will join with other congregations across New England. This service based on a traditional Seven Last Words service for Good Friday will place the traditional scripture texts of Jesus’ final words from the cross in conversation with those of seven black Americans killed by law enforcement. This service will be an adaptation of the multi-movement work “Seven Last Words of the Unarmed” by Atlanta composer Joel Thompson. Thompson was inspired by Iranian-American artist Shirin Barghi’s #lastwords project, and drew from more than a dozen of Barghi’s illustrations containing the dying words of unarmed black men shot and killed by police or other authority figures. Thompson then chose seven statements that aligned most closely with the classical structure of Joseph Haydn’s “Seven Last Words of Christ on the Cross.” This service will premiere on Guilford Church’s YouTube at noon and will also be broadcast to BCTV at the same time.

So Judas brought a detachment of soldiers together with police from the chief priests and the Pharisees, and they came there with lanterns and torches and weapons.  Then Simon Peter, who had a sword, drew it, struck the high priest’s slave and cut off his right ear.  The slave’s name was Malchus.  jesus said to Peter, “Put your sword back into its sheath.” 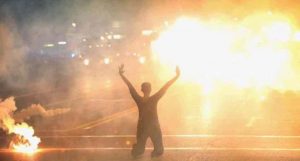 Our worship for this Good Friday is centered around the seven last words of Christ and will place the traditional scripture texts of Jesus’ final words from the cross in conversation with those of seven black Americans killed by police or others acting as legal authorities.

In this last year, so filled with grief and suffering, as we watched the COVID virus ravage our communities and indeed the world, there was another virus, an epidemic here in our country. It seems that  this epidemic is just now coming to light although it has been rampant for generations. I’m talking about racism.  Our worship service today, gives us the opportunity to witness, hold and lament the pain of this epidemic together as one family of faith.

This service is an adaptation of a multi-movement passion piece by Atlanta-based composer Joel Thompson originally performed 2015 by the Men’s Glee Club at the University of Michigan. Thompson was inspired to write the piece by the artist work of Iranian-American artist Shirin Barghi’s called the #lastwords project. Barghi’s illustrations contained the dying words of unarmed black men shot and killed by police or other authority figures paired with a symbolic, simple lines drawing.

Our worship leaders today have substituted some of the quotes from Thompson’s original work with the words of women and people who have died since the work premiered in 2015.

As we begin our time together, I wish to share a poem entitled “Here” by Rev. Sarah Are. This poem is a part of Guilford’s worship series Again & again, A Lenten Refrain.

There are places that our bodies know—
The curve of the couch, the creak of the porch swing, The number of steps to our love’s front door.

These are the travel routes,
The many destinations of a well-lived soul.

And while my soul would always prefer To stay in the sun, living on the
Front porch swings where life is easy,

From time to time,

We all find ourselves at grief’s front door,
In love’s waiting room,
Or on the long and treacherous road to justice’s house.

So when you do,
Remember:
Your body can be in a familiar space
While your soul can feel a long way from home.
Go easy on her.
She is traveling.
Being here has never been easy. – Rev. Sarah Are

The service consists of seven short messages.  The themes are:

1) Jesus speaks to the Creator God
Luke 23:34
Then Jesus said, “Father, forgive them; for they do not know what they are doing.”

2) Jesus speaks to the others being crucified
Luke 23:43
He replied, “Truly I tell you, today you will be with me in Paradise.”

5) Jesus is Thirsty
John 19:28
After this, when Jesus knew that all was now finished, he said (in order to fulfill the scripture), “I am thirsty.”

John 19:30
When Jesus had received the wine, he said, “It is finished.” Then he bowed his head and gave up his spirit.

“How did switching lanes with no signal turn into all of this,” Sandra Bland, 28

7) Jesus’ Last Words
Luke 23:46
Then Jesus, crying with a loud voice, said, “Father, into your hands I commend my spirit.” Having said this, he breathed his last.

“Were You There?”
African-American Spiritual, Public Domain

“What Wondrous Love is This?”
Public Domain

For Further Prayer and Reflection: 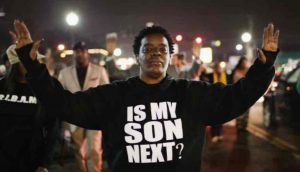 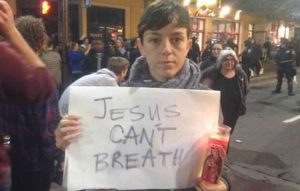 Moved and inspired by these two photographs and after the grand jury in the Eric Garner murder declined to indict the officer responsible for his death, I wrote this piece as part of a sermon entitled “Expecting” delivered to the Unitarian Universalist Congregation of St. Johnsbury on December 14, 2014.

“As I reflect on the events of this past few weeks, I can’t help but think of Mary. I wonder what she might have felt if in that moment of holding her newborn son she also knew that he would be killed at the hands of the Empire, that hatred, fear and violence would leave her a grieving mother. I think of Mary experiencing that moment of horror as she watched her son hands up and outstretched, suffocating – Jesus can’t breathe.” Written 12/14/2014

The #LastWords series was started in 2014 to capture the #LastWords of Black victims of police violence, and a reminder of the devastating toll that American racism, and state violence takes on black families & communities.